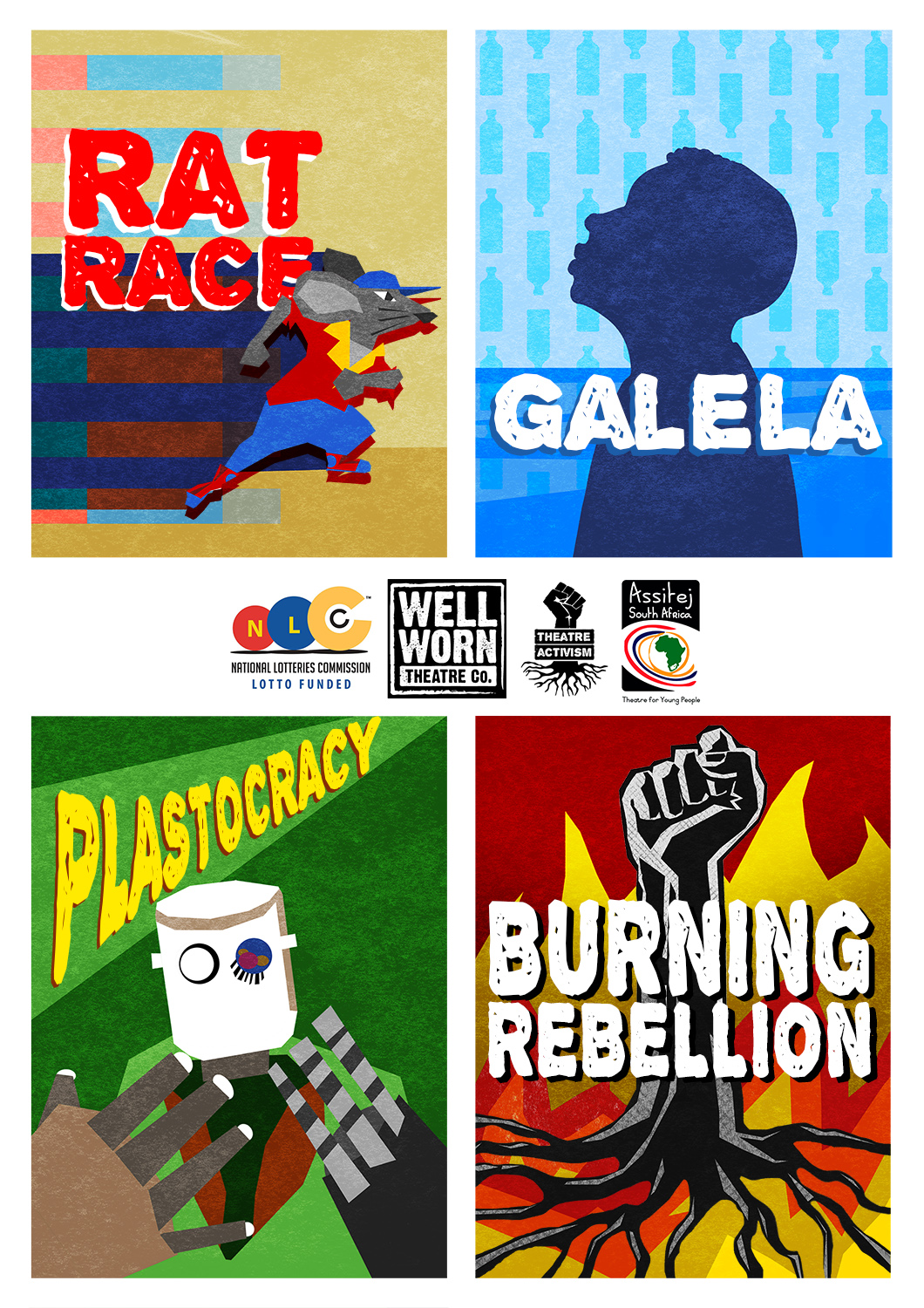 We are currently accepting bookings for our touring productions, throughout the school year.

Our Earth is in trouble. Indigenous people across the globe have known this, better than most, for decades. Tens of thousands of scientists from all walks of life agree that Climate Change is happening right now. The planet is entering a period of unprecedented human-induced global warming, with the highest and lowest temperatures ever recorded hitting the news. We are facing a future defined by civil unrest, fuelled by unpredictable weather patterns that bring with them super storms, floods, rising sea levels, drought, food and water shortages and climate refugees. If we humans continue on our ecologically destructive path, catastrophic climate change will signal the end of our way of life. Given this fatalistic picture, it is easy to see why the young inhabitants of our planet are so angry right now. They are set to inherit an apocalyptic future which they neither caused nor asked for. On top of this, they are also expected to fix the problem, and stay ever hopeful while doing so.

With elements of Hip Hop, Spoken Word, movement and song, ‘Burning Rebellion’ is an ecological protest poem that gives voice to a profound sense of injustice, a rightful rage, and a fear of what is to come. From the next generation, the plea is simple: Governments! Politicians! Big Business! ‘Grown Ups’! Let’s fix this mess. Before it is too late.

‘Burning Rebellion’ is the third and final production in award-winning Well Worn Theatre Company’s touring play programme. The project is made possible by a generous grant from the National Lotteries Commission. ‘Burning Rebellion’ is aimed at Grade 12 learners and will premiere at The National School of The Arts Festival in March 2019. Following this, the production commences a nationwide school’s tour.

A forlorn creature gathers itself together, slowly rising out of the discarded detritus of humanity. Gaining consciousness and determined to live, it tumbles over the landscape, hurtling downriver and out into the ocean to meet a vast, swirling petrochemical ooze. In its mind a single thought forms: what am I?

Every minute, one refuse truck of plastic waste is dumped into the ocean. The impact on Earth’s eco-systems are catastrophic. ‘Plastocracy’ is a sci-fi puppet voyage to a future world of wanton waste, reminding us that there is no AWAY.  Plastocracy was the first play created as part of Well Worn Theatre’s three-year touring play programme funded by the National Lotteries Commission. The productionpremiered at the National Arts Festival in 2017 prompting The Critter to claim that ‘Plastocracy should run in every SA school’.  The Naledi-nominated play completed a national tour of high schools in and also appeared at both the Hilton Arts Festival as well as RedFest JHB in 2017. #ThereIsNoAway

‘The performance was excellent, educational and relevant’ – Curtis Nkondo School of Specialisation

‘It was a fab display of environmental drama. Two thumbs way up’ – St Thomas Aquinas School

Splash! Splutter! Then shhhhhhh… Would you dive in next? ‘Galela’ is the thirst-quenching story of a small community deeply affected by our country’s water issues. Three best friends bravely embark on a project to make their town´s drinking water safe again. They soon discover, however, that they have waded into hot water and that the problems affecting the town dam are deeper and murkier than at first glance. However, Thabang, Zalo and Biggie are not a trio easily scared-off by the corrupt mayor and they dive in to fix the mess, proving in spectacular fashion that children with the biggest imaginations will save the world. Directed by multi-award winning Thembela Madliki (‘Nyanga’ NAF 2016 and ‘Bayephi’ NAF 2017), ‘Galela’ features the energetic physical theatre talents of Lerato Sefoloshe, Mlindeli Emmanuel and Tebogo Machaba. The performance is geared for children aged 8 to 12, though parents, teachers and older siblings also enjoy this epic adventure play.

‘The sound effects and singing were excellent. The actors did an amazing job! Thank you for the lovely performance.’ – Parkview Senior Primary, Gauteng

‘Absolutely fabulous – so relevant to [the learners’] Water Explorer efforts. We particularly love the environmental themes you produce. Such a great reward for all their efforts.’ – Bridget Ringdahl, Water Explorer Programme, KZN

‘I love the fact that so few props were needed to do this. The message was powerful.’ – Saxonwold Primary, Gauteng

‘We enjoyed the show and loved the song and had a better understanding concerning saving water.’ – Nkosi’s Haven Children’s Home, Gauteng

A pop-up storybook play for the very young about an unlikely friendship between stressed-out city rat Miles and kind, easy-going farm mouse Melissa. It’s a comic play with a gentle eco theme that uses clowning, puppetry, illustrations, live music and physical theatre to tell a colourful ‘tail’ about Big Changes in Little Lives. The story follows Miles the rat, a Big Cheese in the Big City, who’s hectic lifestyle starts to make him ill. He is ordered to go on holiday to the countryside to try and relax. There he meets Melissa, a strong and capable field mouse who loves the peace and tranquility of her earthy farm life. Miles and Melissa get off to a bad start when their worlds collide and they discover that they have very different daily routines. Miles thinks Melissa is bossy and Melissa thinks Miles is loud. Things can change however, and so can rodents. Melissa helps Miles learn how to control his temper, relax and find peace in the little things like gardening and a good night’s sleep. Miles teaches Melissa how to really dance! After his holiday, Miles returns to the Big Smoke a changed rat, with tools to help him cope with his busy city life. ‘Rat Race’ was created by Well Worn Theatre Company in partnership with ASSITEJ South Africa specifically for ages 4-6 and their grown-ups

‘If you have small people in your life or just want to experience sheer delight this is a must see.’ – Tracey Saunders, Curious Girl

‘A clever use of slapstick humour, inventive puppetry and heart-warming clowning. This piece is solidly directed with a wonderful balance of physical humour, sing-along music and visual story telling.’

One thought on “‘Theatre Activism’ Season”

This is me making my way over, post-haste to the @

Just popping in to our usually quiet IG account to